Since childhood, she loved to embroider and sew. In 1975 she graduated from vocational school in the city of Kairakum (Tajikistan), specializing in weaving.

She began her career in the jacquard workshop of the carpet factory in Kairakum.

In 1990 Sabrie Eyupova and her family returned to Crimea. Because of discrimination based on ethnicity, she could not find a job in her specialty; as such, for the first years she had to work as a winegrower in the village of Veresaevo, Saki region. At that time, Sabrie got acquainted with famous Crimean Tatar artist, master and specialist in the field of Crimean Tatar ornament Mamut Churlu.

In 1996 Mamut Churlu gathered like-minded people to share knowledge and help them use the wealth of traditional ornaments.

The craftswoman learned the technique of national weaving from weavers Niyara Reshatova and Shefika Baimambetova. This work required not only skill, but also patience, thanks to which the craftswoman embarked on the path of reviving the Crimean Tatar art of weaving kilims (carpets).

Sabrie Eyupova is the creator of several hundred kilims, each of which is the embodiment of taste, traditional restraint and colorfulness.

The craftswoman has mastered all kinds of Crimean Tatar kilim weaving, as well as the technique of weaving Asian pile carpets "julhirs".

Carpets and kilims created by Sabriye Eyupova from yarn dyed with natural dyes were not only presented at exhibitions, but they also decorate the interiors of many Crimean Tatar houses. 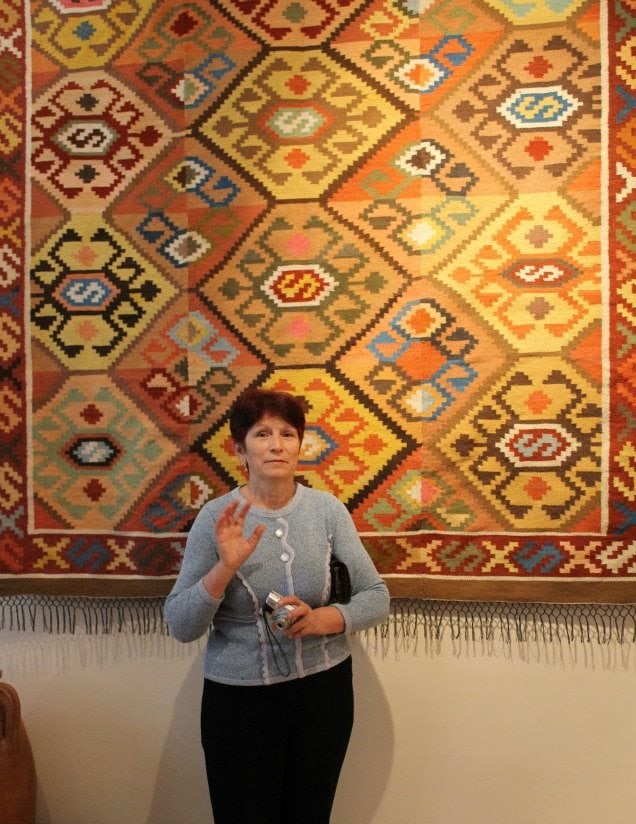