Zuleikha Bekirova is an artist, a master of decorative and applied art, a specialist in carpets, tapestries, a master of Crimean Tatar traditional embroidery.

She was born in the village of Mallalar, Dzhankoy region, Crimea, in 1913. Since childhood, she expressed interest in embroidery, and her mother, a needlewoman, taught her the basics of this ancient art.

After graduating from Crimean Tatar school, parents sent their talented daughter to the town of Kezlev to enter Eski-Ornek artel, where famous craftswoman Adavie Efendieva worked.

There, the girl professionally mastered various types of embroidery techniques. She became one of the best embroiderers in the artel, successfully executing the most complex elements of ornamental composition.

In 1932 Zuleikha entered Moscow Art and Industry College, where she mastered the elements of traditional embroidery not only of Crimean Tatars, but also of many peoples of the East. At this time, she participated in expeditions to the republics of Central Asia and Kazakhstan, as a result of which she collected a wealth of material on carpet weaving.

After graduating from college in 1936, the craftswoman continued her education at Moscow Institute of Applied and Decorative Arts. At the same time, she was engaged in creative work, her works were exhibited at various all-union and international exhibitions.

From 1936 to 1940, the artist worked as a teacher of special subjects at an art-industrial technical school in Moscow, transferring her knowledge and experience to future masters.

In 1939 Zuleikha Bekirova became a member of the Union of Artists of the USSR. In the same year, she took part in exhibitions in New York and Kyiv.

In 1949 she started doing her postgraduate degree in Art at the Scientific Research Institute of the Art Industry, which she completed in 1952.

In 1998, in Crimea, the Museum of Crimean Tatar Art, together with the Ethnographic Museum, organized an exhibition of Zuleikha Bekirova "Creation of the Golden Hands" in the Crimean Republican Local History Museum, where her works of authorship were presented. 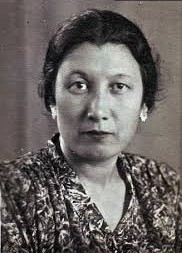