Ilmi Ametov was born in the city of Katta-Kurgan, Samarkand region (Uzbekistan), to a family deported from Crimea, in 1947. He is a descendant of the Emir-Ali Seit-Mamut-oghlu clan, unjustly accused of the murder of Abbot Parthenius in 1866 and executed in 1866 in Feodosia. The case is known as "Taraktash tragedy".

In 1966, Ilmi Ametov entered Polytechnic Institute in Navoi. In 1967, he met dissidents Pyotr Yakir, Vladimir Bukovsky and Mustafa Dzhemilev in Moscow. In 1968 he was expelled from the institute for his participation in the national movement of Crimean Tatars. In the same year, Ilmi Ametov and his family tried to set up house in Crimea, but after the persecution of the Soviet punitive agencies, he settled in the city of Krymsk, Krasnodar region.

In 1970 Ilmi Ametov moved to Moscow. Continuing to participate in the national movement, he passed on information about the violation of Crimean Tatars’ rights to foreign media.

In 1974, Ilmi Ametov graduated from the Faculty of Artistic Stone Processing of Baku State Art College. He created his first work in Azerbaijan (Karabakh).

In 1977 he worked in restoration workshops in Baku, then returned to Krasnodar region.

In 1987 Ilmi Ametov moved to Crimea. For more than a year, he studied the art of Crimean Tatar stone carvers, tried to restore Sultan Baybars mosque on his own, and also studied the skill of Armenian carvers.

Between 1987 and 1988, on his own initiative, he carried out restoration work on the springs in Surb-Khach monastery.

In 1994, Ilmi Ametov created a monument to the "Victims of Deportation" in the city of Sudak using the money of the compatriots from the United States and the resources of the company he ran - "Akmesjid".

In 1998, 130 years after the execution of his great-grandfathers by the tsarist regime, as a descendant of the Emir-Ali Seit-Mamut-oglu clan, the sculptor made his old dream come true - he built a monument on Orman tepe in memory of Seyid oglu Seidamet, sung in folk songs.

On May 17, 1999, in Simferopol, he built a monument to outstanding human rights defender and dissident General Pyotr Grigorenko, who was his mentor.

In 2000, Ilmi Ametov created a stone cross, which was installed on the building of Vladimir and Olga Cathedral of the UOC-KP in Simferopol.

In 2004-2006, Ilmi Ametov, together with the Association of Crimean Tatar Educators "Maarifchi", implemented a number of projects for the manufacture and installation of memorial signs on the site of the destroyed holy places for Muslims - Aziz: Bai-Kiyat, Tuvaka, Kyrgyz-Kazak, Kyrk-Aziz (in the village of Kirk-Cholpan), and also installed "dyurbe-tash" in the villages of Otuz and Korbekul.

In 2005, on the island of Sakhalin, as a gift from Ilmi Ametov, there was erected a monument to Captain Ilyas-Murza Dairsky, who heroically died during the Russian-Japanese war of 1904-1905.

In 2007, on the anniversary of the deportation, the sculptor built a monument in the village of Yarylgach (Mezhvodnoe) of Ak-Sheikh (Black Sea) region.

In July 2009, a fountain was installed at Darlyk-Keshme spring in memory of fellow villagers who did not return from the war and died in exile.

In total, more than thirty monuments and memorial signs by Ilmi Ametov were installed in Crimea. 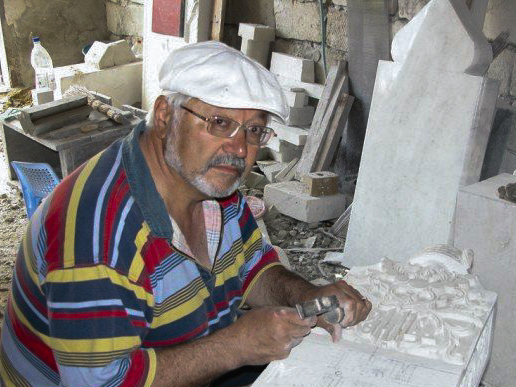