Graduated from the Republican Art College named after P. P. Benkov (the Department of Painting), Tashkent (1971).

Since 1971 – a participant of republican, all-Union, international and foreign exhibitions.

Since 1994 - a member of the Union of Artists of Ukraine.

Since 2014 - a member of the all-Russian creative public organization “The Union of Russian Artists”.

1998 - II Prize of the All-Ukrainian Triennial of Painting.

2001 - the honorary title "Honored Artist of the Autonomous Republic of Crimea".

2009 - State Prize of the Autonomous Republic of Crimea.

2019 - silver medal of the Russian Academy of Arts.

State Museum of Arts of Uzbekistan.

In art galleries and private collections

The famous Crimean artist Ramazan Useinov remembers the moment of the birth of his credo, for it was formed after understanding the surrounding reality and searching for his own path. "Having ruined a bunch of canvases, all smeared with paint, I suddenly glanced at a blanket sewn from motley, colored patches; images appeared in my head, and I understood how and what to paint ..."

His paintings are memories, thoughts, generalizations. One of the most important features of the painter's work is felt in them - boundless love for his native land, expressed outwardly with restraint, but with great inner excitement and lyricism.

Ramazan Useinov was born in the ancient Samarkand, so he was formed as an artist, equally absorbing the culture of the East and the West. But his style and images turned out to be very characteristic of Crimea, and they now fit into the Crimean art system as an integral part of it.

The master's works are always recognizable at exhibitions due to the characteristic combination of oriental motifs with the specifics of the southern Crimean landscape, melted by his imagination into a certain symbol of the captured event or state of mind.

He creates generalized images of people and nature, inspired by the associative historical, literary, and cultural trends of the time. Poetic thoughtfulness, contemplation, immersion in their own world of daydreams and dreams, which cause a constant response from the viewer, play an important role. Decorative flat painting, the beauty of local color, the conventionality of luminous color and poetic images-symbols make his pictures of oriental fairy tales exciting and unforgettable. 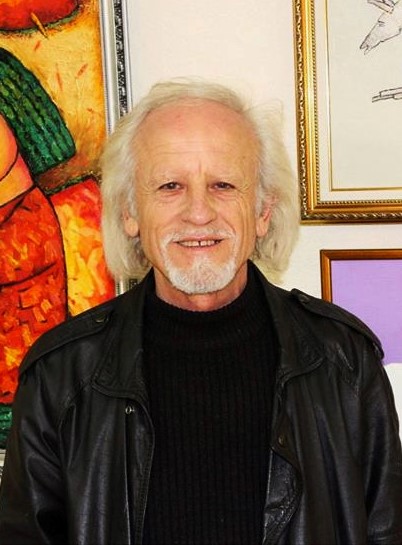