Brief information about me

Zarema Yaliboylu is a photo artist from Crimea.

Since 2007, she has worked as a photographer for Crimean Tatar newspapers and news agencies.

From 2009 to 2011 - photographer in the Crimean Tatar youth magazine "Nesil", photo editor of the site "Nesil".

From 2011 to 2014 - photographer and site administrator of the Crimean national belt wrestling team "Kuresh".

Since 2019, she has been participating in the tamirlar.com project, on the website of which there is a photo gallery of portraits of people who survived deportation.

Since 2019 - Project @genocide1944 on Instagram, dedicated to the deportation of Crimean Tatars.

I was born in Gelendzhik, Krasnodar Territory, in 1986. In kindergarten, I told everyone that we would return to Crimea. My parents instilled in me love for the Motherland and respect for our culture. When I was 5 years old, my family and I moved to Simferopol. Here I graduated from general education and music schools. I have always enjoyed being creative, singing, playing the piano, printing photographs on a magnifier, photographing friends and girlfriends with cameras that were available. But the hobby remained a hobby, until graduation. Having received a law degree, I realized that I did not want to study law, and at the call of my heart I began to study the art of photography.

Work and participation in events

In my university years, I joined the Crimean Tatar organization "Kyrdashlyk". Thus, I have always attended various Crimean Tatar events. I really wanted to show what we are to the whole world, to interest our culture and, of course, to tell about the unjust deportation of the Crimean Tatar people in 1944. This topic is special for me, since at school I have heard accusations of treason against me more than once and had to make excuses.

Since the age of 22, I have been shooting photo reports for Crimean Tatar publications, news agencies and for the glossy magazine "Nesil".

In 2010, I took part in the congress of Turkic photographers from the International Organization "Turksoy" in Kazan. My photographs are used for the album "Tatarstan in the lens of photographers of the Turkic world".

Exhibitions and participation in photo projects

In 2011, my first exhibition "My Horizons" is being held in Simferopol at the Ukrainian House. It featured photographs of portraits of Crimean Tatars of different ages and Crimean nature.

Continuing to work in the magazine "Nesil", as a photographer in the Crimean Tatar belt wrestling team "Kuresh", on television until 2014, I collected my archive.

In 2017, a photo exhibition of my works "Crimea through the veins" was opened in the Crimean House. Why such a name. We, as an indigenous people, have a special attitude towards Crimea, we feel it differently, we are always drawn to our native land, and we return. It is in our veins, passed down from generation to generation.

In 2018, my friend Alim Aliyev, the program director of the Crimean House, proposed a photo project for me called "Imprint of the House". These are photographs of tattoos associated with Crimea. As it turned out, a huge number of people who made a tattoo depicting the symbols of the Crimea and the Crimean Tatars on their bodies. It was an interesting experience.

In 2019, I was finally ready to show the world the already assembled small archive of photographs of people who survived deportations. Thanks to my friends, the editor-in-chief of Ukrainska Pravda, Sevgil Musayeva, and the program director of the Crimean House, Alim Aliyev, at the beginning of May 2019, the "Faces of Deportation" photo exhibition took place in New York, a few days later, thanks to the diaspora of Crimean Tatars in Canada represented by Rustem Irsai photo exhibition was held in Toronto, and on May 16 at the "Crimean House" and near the Ministry of Foreign Affairs in Kiev.

In the summer of the same year, the "Faces of Deportation" photo exhibition was held in Kremenchuk, where artists created graphic portraits of the heroes of my photo exhibition.

In 2019, I created an Instagram account @genocide1944 on the social network, in which I publish photographs of people who survived deportation, whose portraits were not included in photo exhibitions with their stories, as well as post stories of Crimean Tatars' grandparents who share with me. The project site tamirlar.com also has my photo gallery.

When I shoot portraits of survivors of deportation, the outgoing generation of Crimean Tatars, I feel that I am shooting our memory, history, slipping through my fingers. Sometimes I travel through the most forgotten corners of our Crimea, to capture the fragments of the once destroyed life, abandoned Crimean Tatar houses, springs, streets. Strangers still live in most of the old houses and former Mosques. When the cemeteries of your ancestors are desecrated, this is especially painful to shoot.

I am in love with my Motherland and when those who do not know about Crimea see it for the first time with “my eyes” after visiting my exhibitions, I am happy. 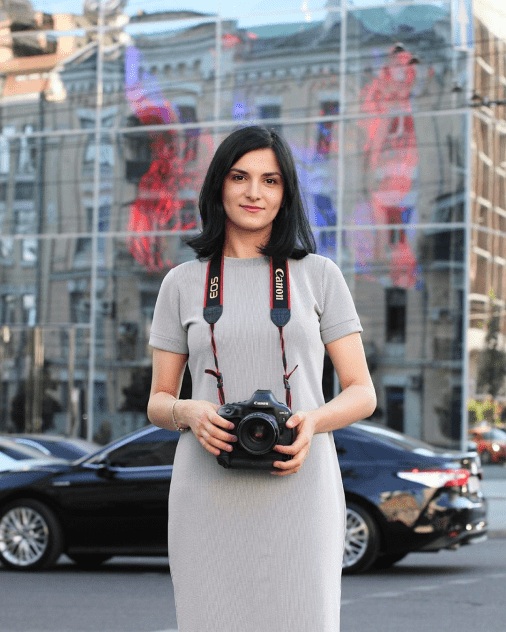 Photo exhibition "Crimea through the veins"

Photo of Bakhchisarai and sights