Asan Seydametov was born on October 2, 1962, in the city of Tashkent, Uzbek SSR. From 1978 to 1982, he studied at the Republican Art College named after P. Benkov. From 1984 to 1989, the artist received an education at Ostrovsky Theater and Art Institute, at the Department of Theatrical and Decorative Painting. In 1992 he returned to Crimea. He has been a member of the Union of Artists of Ukraine since 1995.

Asan Barash is an avant-garde artist, his works are complex and deep in content, and for their full perception it is necessary to consider the works through the artist’s eyes. And at the same time, hardly anyone will be able to pass by his paintings indifferently. The paintings fix the viewer’s eyes on them with their power and particular expressiveness and make the viewer think and look for a connection with reality. It is noteworthy that the artist does not stop at one type of fine arts to express his ideas and feelings; he turns to graphics and sculpture. He boldly introduces new forms into the visual arts of Crimean Tatars without abandoning national motifs.

The collapse of the USSR, the return of the Crimean Tatar people to their historical homeland - all these contributed to the creation of several series of monumental paintings by the artist, such as "Ethnos", "Peak", "Apotheosis" (1990 - 1993), "Wasps", "Suspended", "Loneliness", "Arabaji", "Defeated". The artist returns to such themes as "Wasps", "Dessert", "Arabadzhi", trying to express something that has not been fully expressed.

Asan Barash is a very modern, multifaceted and versatile artist. He successfully works in genre painting, portraiture, landscape and still life. Of course, he is interested in the topic of the return of Crimean Tatars from deportation, their settlement in the homeland of their ancestors, their new life.

Referring to himself as a monumental artist who prefers large canvases, Barash believes that many styles have something in common and calls this phenomenon with one clear word "realism". This is how the world appears in the artist's imagination. 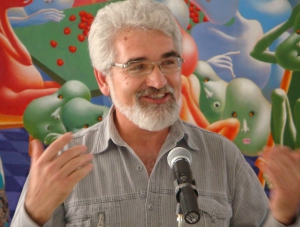