The artist, craftsman, designer and ethnographer Mamut Churlu was born on March 1, 1946 into a deported from Crimea family in the city of Fergana, Uzbek SSR.

In 1965 the young man graduated the Music Theory department of the Fergana Music School and in 1970 he also graduated the Glinka Novosibirsk State Conservatory as a musicologist.

In 1980 he got a degree in fine arts in the Fergana Art School.

At that time Mamut Churlu had been working in textile arts (tapestry) and participated in many all-soviet and republic exhibitions.

The artist, craftsman, designer and ethnographer Mamut Churlu was born on March 1, 1946 into a deported from Crimea family in the city of Fergana, Uzbek SSR.

In 1987 Churlu found his way to express his feelings and emotions through painting. In the age of 42 Mamut Churlu became a member of the Union of the Artists of the USSR. He was the one who reintroduced kilim weaving – early unknown in Central Asia kind of folk art of the Crimean Tatar people.

In 1989 the artist moved back to his homeland Crimea and started to set his personal exhibitions of paintings in Moscow, St. Petersburg, Simferopol, Feodosia, Sevastopol, Duisburg, Heidelberg, Cologne and Kyiv.

In 1996 the international collaboration fund Kounterpart USAID sponsored the program of revival of the Crimean Tatar kilim (rug) weaving that was successfully implemented by Mamut Churlu. Three years later he won the Ismail Gasprinsky award for his contribution to the development of the Crimean Tatar culture.

Since 1999 the craftsman has been engaged in reviving the practice of the national embroidering and pottery and organized four international open-air workshops on dyeing different materials with natural dyes after which he held the international exhibition of the artists from Ukraine, Poland, Moldova, Mexico and Switzerland.

In 4004 for all his effort put in a revival of the folk art of Crimea Churlu became a member of the National Union of Ukrainian Craftsmen and was awarded with many diplomas of the Ukrainian exhibitions and creative competitions.

In the following years the artist was an organizer as well as a participant of the first exhibitions of the Crimean Tatar modern folk and decorative arts (Kyiv), a manager of the Krimsky Stil (Crimean Style) project which was focused on the revival and development of the traditional decorative art of the Crimean Tatar people. Later he founded the Chatyr Dag creative union.

Contribution to culture and the artist's work in museums

Mamut Churlu’s versatile artistic talent can be seen in his work on the collection of Crimean Tatar tales, in publishing the Traditional Culture of the Crimean Tatars ethnographic studies, in creating drafts for mosques, coffee-houses, decorative sculptures as well as in organizing workshops and open-airs for the young generation of Crimean Tatar artists.

In 2016 the Crimean Tatar Museum of Cultural and Historical Heritage (Simferopol) held the artist’s anniversary exhibition. For his outstanding work on the revival of the national culture of the Crimean Tatars Mamut Churlu was awarded with the title of “Merited Artist of Ukraine” (2010).

Mainly the artworks of the famous artist are created in forms of monumental textile compositions, painting, kilims (carpets), decorative textile panels in embroidery technique, ceramics with the Crimean Tatar national ornaments, hand painted porcelains and other works. In addition, Mamut Churlu is the author of the research on ceramics, carpet weaving, textile dyeing with natural dyes. He published textbooks on drawing national ornaments for kids and wrote articles about the Crimean Tatar decorative art and the challenges on the revival of Crimean crafts.

Mamut Churlu’s paintings and decorative art pieces are in the collections of the museums such as: 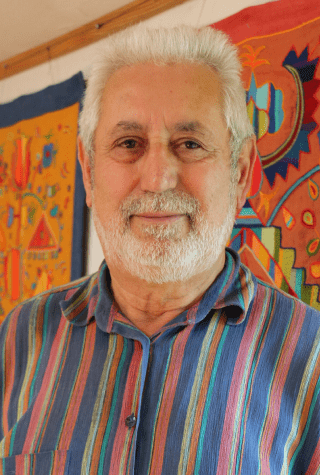